Rich and I had planned to go out to dinner last night and then maybe to a movie. Calvin has the day off from school today and had an overnight last night with my parents, so we were footloose and fancy free. Of course, when it came time to pick a restaurant, Rich and I were clueless. Even after running through a litany of old favorites and new possibilities, we ended up with a big, fat zero. The process of choosing was stressing us out, so we decided to stop trying to force it and make something at home instead.

Flatbread pizzas had caught my eye on several of the menus we perused. I do find that name kind of funny, and even redundant – what is a pizza, if not a flatbread, after all? But it is a recognizable thing on restaurant menus, so I’ll stick with the name, even if it offends my literal tendencies just a little bit.

I mixed up our standby whole wheat pizza dough and let it rise while we concocted and gathered the rest of the ingredients. We had one shallot, which I decided to caramelize. It was as easy as pie to let it slowly transform to a lovely golden brown in the pan while we worked on the rest of dinner. I’m not sure why I have never caramelized shallots before, though if I had, we would have realized that a trip to the store for a few more would have been worth it. We both agreed we wanted at least twice as many shallots on our flatbreads.

In addition to the shallots, we used Jarlsberg, mozzarella, ricotta and Parmigiano-Reggiano, a little diced chicken breast from the freezer, fresh rosemary from my plant in the flowerbed, thinly sliced apple, garlic and olive oil. 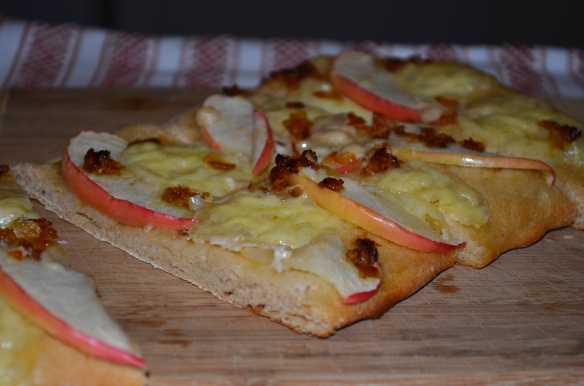 We made one flatbread with garlic, rosemary, chicken and mozzarella, one with rosemary, garlic and all the cheeses and two with apple, Jarlsberg and shallots. They were as good as some restaurant flatbread pizzas we have had. And we got to make them with exactly the toppings we wanted.

Our evening was a little more low key than our original plans, but we weren’t complaining. We got a cozy evening together, cooking, eating and spending time doing exactly what we wanted – sounds like a perfect date night to me.