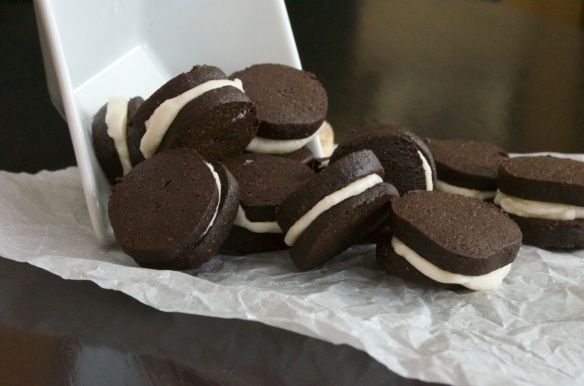 I have a favorite chocolate sandwich cookie that I make every so often. It started out as a basic cookie, until I tinkered with the recipe. I increased the cocoa and decreased the flour. Later, after more taste testing, I replaced some of the cocoa with some black, extra dark cocoa I had ordered from King Arthur Flour. Perfection. Darkly chocolate, slightly crunchy cookies surrounding creamy vanilla filling that tastes slightly of butter. After a day or two in an airtight container the cookies get slightly softer, which I really like. 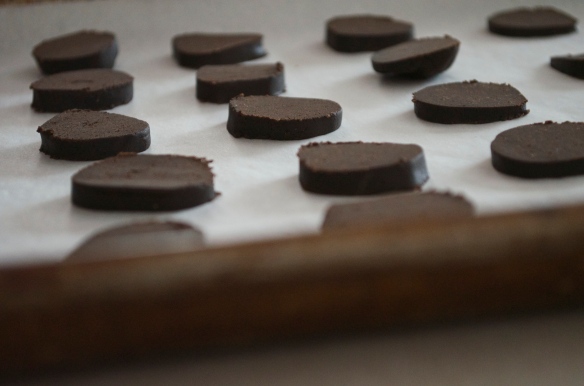 If you don’t want to buy special cocoa for these, they are perfectly good with only natural cocoa powder. I have seen a few different kinds of darker cocoa in the grocery store, next to the regular cocoa. I have only used natural cocoa and a little of the black cocoa, as noted in the recipe, but feel free to experiment. If you use only natural cocoa your cookies might be a lighter brown than the pictures, but they will still taste fabulous.

The last time I made the cookies, we were brainstorming different fillings we could try. We came up with cinnamon, cherry and bacon. Cherry and bacon were a little more complicated than we wanted to mess with that day, so we decided to try cinnamon. I will tinker with the bacon and cherry possibilities some day soon. 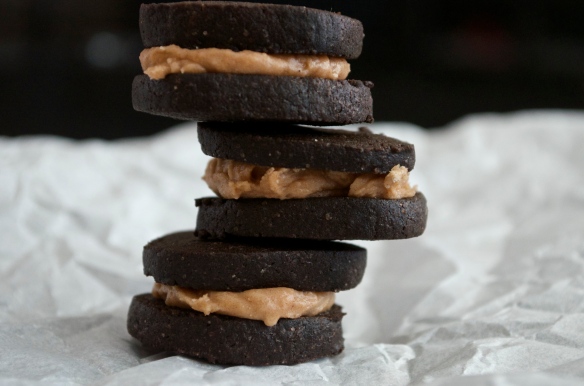 I wanted some cookies with plain vanilla filling, so I divided the filling in half and added cinnamon. I started with ¼ teaspoon, but it was barely discernable. So I doubled it. The cinnamon flavor was stronger, but I thought it might get lost against the dark chocolate of the cookies. So I added another ¼ teaspoon. Perfection – richly cinnamon without straying across the line into too spicy.

I started out dolloping a tiny portion of filling onto the middle of a cookie and then gently squishing the filling flat with a second cookie. While this made a pretty cookie, with smooth edges on the filling, there wasn’t enough filling. I went back to my old method of smearing the filling on and adding the top cookie. Not as neat, but definitely a better ratio of cookie to filling.

I could have pulled out a piping bag to pipe the larger amount of filling into the middle of the cookies, but that was way more complicated than I wanted to get. Full disclosure: I have used my piping bag just a handful of times over the 10 years I have had it. Maybe someday I will get inspired to use it more often, but I’m not holding my breath. If you want picture perfect cookies, you can certainly use a piping bag. But I’m in favor of saving the time and cleanup and eating my slightly less-than-perfect cookies that much sooner.

If you want to bump up the chocolate flavor a bit, you can substitute 2 tablespoons of dark or black cocoa for 2 tablespoons of the natural cocoa. This is totally optional, but really good.

Do not preheat the oven. The dough needs to chill before baking.

Beat the ½ cup butter and granulated sugar together until light and fluffy. Add the egg and vanilla and beat again until well combined and light. Add the flour, cocoa powder and salt and mix on low speed until dough is smooth.

Divide dough in half and shape each half into a long log, about 1¼ inches in diameter. Make the logs as smooth and uniform as possible so your cookies will be uniform. Wrap the dough logs in parchment paper or plastic wrap and freeze for at least 30 minutes.

When the dough is chilled preheat the oven to 350 degrees. Line two baking sheets with parchment paper or lightly grease.

Work with one log at time, leaving the other one in the freezer until ready to slice. Use a sharp knife to cut the log into ¼-inch, or slightly thinner, rounds. Try to keep them uniform so they all bake at the same rate. Place the rounds fairly close together on the prepared baking sheets. They do not spread or rise very much at all.

Bake cookies, one pan at a time, for 5-6 minutes, or until they are firm to the touch, but not hard. The cookies will not change color, but they will puff very, very slightly.

Remove baked cookies to racks for cooling. When cookies are room temperature, spread 1-2 teaspoons of filling on the flat side of one cookie. Top with another cookie and gently press the cookies together. Leave filled cookies on the wire racks until the filling dries and sets up a bit, at least an hour. Store cookies in an airtight container for several days, or freeze for longer storage. The cookies will soften slightly after the first day.

Note: If you want to make the dough ahead of time, make four shorter logs and slip them into a ziploc bag. If it is tightly wrapped, you can freeze the dough for a month or so before using. Slice directly from the freezer and bake as directed.