I’m pretty sure that most people make at least slight variations to recipes from time to time. I know I do (and I like to think that I’m not weird). Sometimes I am substituting for ingredients that I don’t like or don’t have. Other times I am trying to jazz up a dish that we have all the time.

Last week I wanted to make French toast casserole for dinner, but I wanted to do something to make it different. I knew I had a few ends of cinnamon bread and cinnamon rolls in the freezer, which I thought might add a new twist to our normal recipe. We also had part of a tub of whipped cream cheese that I wanted to use up 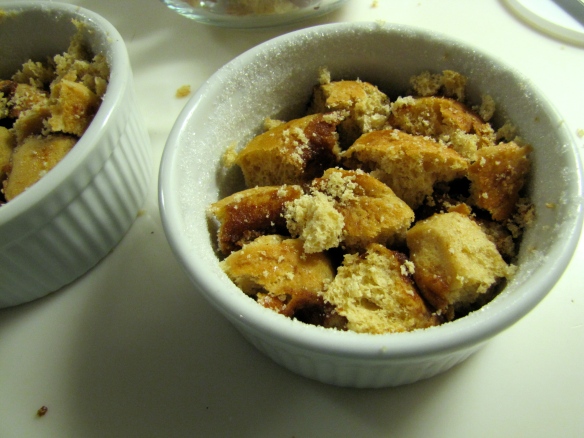 The original recipe calls for beating regular block-style cream cheese with eggs, milk and maple syrup to make a batter to pour over the cubed bread. I decided to skip the mixer and spread my whipped cream cheese over half the bread, and then top it with the other half. Then I could just whisk the eggs, milk and maple syrup together and skip the hassle of hauling out the mixer and washing it when I was done with it.

As usual, I didn’t know when to stop – I also doubled the cinnamon in the batter, and baked the casserole in individual ramekins instead of a big casserole dish. I greased and sugared the ramekins to make sure it would be easy to get the casserole out of the dishes for serving. As an added plus, the ramekins took only a little over half an hour to bake, instead of close to an hour for a large casserole.

My adaptations worked out so well that they might become permanent parts of the recipe. If you don’t have odds and ends of cinnamon bread and rolls in the freezer, you can easily buy either cinnamon bread or even cinnamon raisin bread and use it instead of the cinnamon rolls/bread or regular bread. Challah or brioche would be good too, or whole wheat bread, leftover scones or biscuits, or even cake if you wanted to make dessert instead of dinner or breakfast. Canned pumpkin whisked into the egg mixture might be a nice change for fall. Or throw in some finely diced apples, or even leftover fried apples.

Be sure and post in the comments if you try this version, one of my suggestions, or one that is uniquely your own.